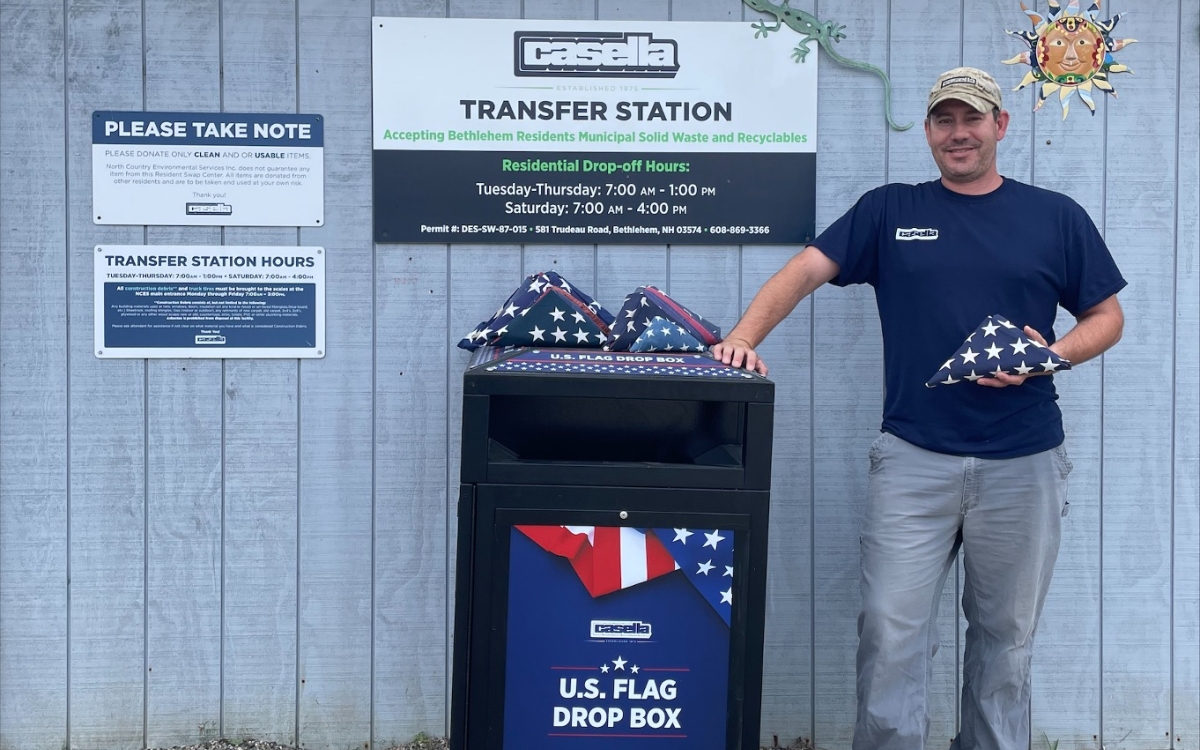 U.S. Army veteran and Casella Landfill Operations Manager Bruce Grover’s career has centered around teamwork, leadership, and service. After joining the military in 2010, he served as a heavy equipment mechanic, team leader, and primary heavy duty wrecker operator for his unit in Fort Leonard Wood, Missouri before his military career ended abruptly in 2015 due to a severe injury.

Grover has now incorporated his patriotic roots into his daily responsibilities at the North Country Environmental Services (NCES) Landfill in Bethlehem, New Hampshire.

Grover soon realized that every year Casella drivers, equipment operators, and other employees were pulling hundreds of U.S. Flags out of recycling bins, garbage trucks, transfer stations, and even the working face of the landfill. In addition to the flags being improperly disposed of, it also poses a risk to employees who try to rescue them. 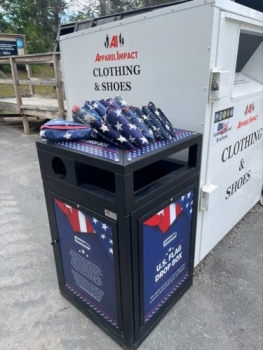 To reduce the risk to employees and create awareness of proper retirement of the flags, he recently implemented a new flag retirement drop box located at the Bethlehem transfer station, with a mission to ensure worn U.S. flags no longer suitable for display are properly retired in an honorable and respectful manner.

“Seeing flags in our transfer station cans made me realize most people do not know the proper way to retire the American flag, and even if they did, they might not know where to bring it. I thought a labeled and well-placed receptacle could aid in educating residents,” explained Grover, adding that his team recovers dozens of American flags dumped at the transfer station annually and properly retires them. “I am very proud to be part of this initiative, and I hope this drop box is the first of many throughout the Casella footprint.”

Recovered flags will be respectfully folded and stored, before a distinguished burning, in collaboration with the Veterans2veterans Group (V2VG), a Littleton, New Hampshire non-profit organization dedicated to assisting local veterans and first responders in need.

Over the years, Casella has built a strong partnership with V2VG through volunteer opportunities and community giving. NCES employees currently serve as board members and volunteers for the organization, and in 2022, Casella was the recipient of the group’s Benefactor Award.

“When Bruce sent me photos of the flag retirement box, we were so pleased that it was there and folks could have a place to bring their colors instead of just throwing them away,” said V2VG President Eric McNail. “We’ve worked with Casella on many occasions to prevent, as much as possible, items from ending up in the landfill. We can’t thank Bruce and Casella enough for everything they’ve done and continue to do to support our efforts.”